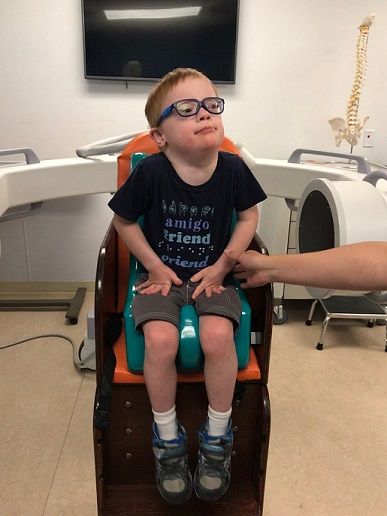 Tomorrow is a big day for us - swallow study time!

The last successful swallow study Emerson had done was probably around the 2 year old mark. At that time we found out he was aspirating and would need all his liquids thickened to a nectar base.

Emerson's feeding struggles have continued so we have tried numerous swallow studies over the last few years to see if we could find some answers, but the studies were all unsuccessful. As he got older and bigger, the swallow study became harder and harder. There were all kinds of factors from the unfamiliar tech conducting the study, to the dark room, to the machine around him, to the barium of course. In fact, the last study the tech was kicked in the face and she asked me to take over getting him to eat and drink which of course wasn't happening. We sort of gave up at that point and have just stuck with the nectar base for his liquids. Well the day is here my friends, no more giving up!

The intensive feeding program suggested a swallow study to confirm if in fact he does need nectar thick liquids before they start training Grant and I on his new feeding protocol. Emerson has been randomly gagging on a few different foods, so they want to see if maybe hes aspirating the liquids from it. Interestingly, they were telling me how it may also give them insight on why he is fatiguing about half way through each meal. Id try to explain it but I probably wouldn't make sense. So you will have to wait for the results. LOL

This is actually the perfect way to have this test done. There will be an SLP conducting the swallow study that he doesn't know, but the OT and OTA he has been working with will be the ones actually feeding him. They will set up the room to mimic his current feeding room, and treat it just like a typical meal, same protocol but just with barium. So that really takes out a lot of the issues listed above on why it didn't work.

They also wanted to take him to the space to get him familiar with the room and equipment prior to the day of the procedure...genius! So yesterday we took a little field trip. The child life specialist, Ashley, made transition cards to help with the process. Love her! We went to the waiting room first and played for a bit in there and than Ms. Ashley showed him the transition card for the room and off he went with her. Perfect transition. :) I stayed back in the waiting room while Ashley showed him the room where the actual procedure would take place. They walked around the room a bit and she said he climbed right up in the swallow study chair! This kid...always surprising me!

Today they wanted to feed him a meal in the swallow study room to get him even more familiar with the space. So off we went for meal three with his OT (Caitlin), Ashley, and myself. We got to the room and Caitlin showed Emerson the transition card and he gave it three taps and off they went. Is it to much to say transition cards have been life changing for us? Hahaha I stayed back in the waiting room because Im haven't been in the room when she feeds him so didn't want to throw him for a loop. The meal went perfect, no resistance at all from Emerson. It is slightly different as Caitlin is feeding him rather than encouraging self feeding. But if you know Emerson, he probably loves that. We also brought his iPad just for this procedure....sort of all hands on deck situation. And an iPad is all the hands you need with Emerson. :p

Fingers crossed that everything goes smooth tomorrow morning. This could give us some much needed answers or just confirm what we are doing is best for Emerson. Either way, its another thing we have been waiting YEARS to check off the list!

So proud of how brave Emerson is with all that's being thrown at him on this journey!

Stay tuned for the results!