The Beauty of Unspoken Words 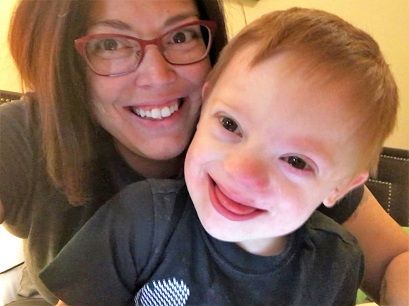 Today was a big day in the intensive feeding therapy program - we have reached the caregiver training portion of the program!! Up to this point I have been in the observation room and Emerson has been in the feeding room with the occupational therapist or occupation therapist assistant. But today mommy is going to be an active member of his sessions. This could go either way!

Three weeks, 45 sessions. That a lot of sessions to observe! I've learned so much, but we all know its not the same as being hands on in the process. I was definitely nervous! Will Emerson be happy or mad that I'm in his sacred space with his sacred therapists? Its no secret that he thrives in therapy when Grant or I am not in the room. But we have seen it all with feeding issues, if you have been following my instastories for some time you have been through the trenches with me! So I was ready for whatever was going to come my way!

The first meal I sat in the observation room so Emerson could get back into the swing of things after the weekend. Breakfast is usually his hardest meal, hes just not a morning person, takes after his mom and dad. Ha! But wouldn't you know he had a pretty perfect meal. His OT said it was probably the best breakfast he's had with her since we have been there. Very minimal behaviors, lots of independent bites, and drank like a champ! I think he's finally found his comfort level in these sessions, which is so comforting. So its probably the perfect time for mom to come in!

For the lunch session, I followed Emerson and his OT back to his feeding room. He took a few double takes at me but no protesting. He got bucked in his chair and Ms. Caitlin took her normal spot on his right side, and I sat on his left side. He kept looking at me and smiling, and than the love taps started. Made my heart smile. He was so happy I was there. My job for this session would be to praise him after each bite and drink, and give him his reinforcer after each full rotation of his meal. Easy peasy right?

Emerson has warmed up to the team but they still haven't seen his true personality. I keep telling them about his belly laugh and dance moves, and they are patiently waiting for them. As he took each bite/drink I praised him, and very quickly his personality shined. He clapped after every praise I gave, something he loves to do but hasn't for them yet. He tested the waters a bit and threw his reinforcer toy on the ground, and thats exactly where it stayed. Ignoring the negative behaviors is very important in this process....something I'm not that great at. Although his OT said I did an amazing job at it. If she only saw me six months ago. Ha! About the fourth rotation he had thrown most of his reinforcers on the floor and we only had bubbles left. Theres always one reinforcer that the therapist can control if the child throws all others on the ground. I've watched them use bubbles and he has had very little reaction to them. He would pop them but would not be that excited little guy we always see at home with bubbles. I blew that first set of bubbles and that belly laugh exploded! Clapping, giggling, and just having a great old time. Oh my mama heart exploded right along with his laugh.

The. Best. Feeling. Ever.

His OT said, oh my gosh this is so incredible to see. He certainty loves his mama! We have been waiting to see those smiles and giggles!

Its moments like these that erase all that self doubt I have about what love should look like between Emerson and I. The beauty in his unspoken words is something I am forever grateful I get to experience. Our love continues to grow in ways I never imagined. Autism may play a factor in how often we experience these moments, but I can only thank Autism for bringing the beauty and power to a moment others may take for granted.

In Emerson's last session I was in charge of giving him drinks. He is currently drinking out of a squeegee bottle with a straw. It looks like a bottle you might dye your hair with. We put a "handle" on his chin, which is really kind of a hold, to prompt him to open his mouth and than we squeeze milk into his mouth. I was nervous about squeezing to much, but Caitlin was a great trainer and I was comfortable with it pretty fast. His OT said I did an amazing job with getting him to finish 24 ounces on my first drinking session. That's not usually the norm for parents on the first try. That felt good, maybe we will be able to pull this off when we get home!

I will spare you the details where I had about 6 forks chucked right at my face, which also had his belly laughs attached to it. Try ignoring that negative behavior! Don't worry I've had LOTS of practice with flying utensils and plates. After all we use to velcro his plate to the table. #truestory

The good thing is we saw all these behaviors with the OT two weeks ago, so he is pulling the same tricks with me, and will most likely do the same with Grant next week. We will work on our poker faces in the meantime, but soak in those giggles during reinforcement time!

Its been a long three weeks....so happy to see those smiles and giggles. And even happier to see him eating and drinking so effortlessly! So much outpatient therapy, medical procedures, modifications, tears, and purees got us to this point. To think back to where we were and how far we have come.....its pretty damn incredible. So excited to see how the rest of the week pans out. Im sure my reflexes with utensils will be as fast as Mr. Miyagi catching flies with chopsticks in just a few days. Gaining all kinds of skills in this program! :)